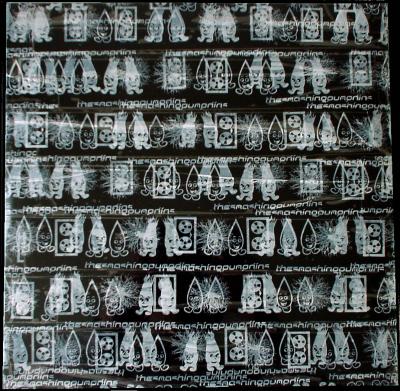 by
The Smashing Pumpkins

MACHINA II/The Friends & Enemies of Modern Music is an album by The Smashing Pumpkins that was released for free on the Internet on September 5, 2000. A sequel to MACHINA/The Machines of God, it is the sixth album from the Pumpkins, though there are many fans who remain ignorant of its existence because it was never commercially released. It consists of three EPs full of B-Sides and alternate versions, and one LP being the actual album. Both MACHINA albums are concept albums. At the time the album was released it was to be the final Smashing Pumpkins studio album, but as of the summer of 2006 the band has reformed and is in the process of writing a new album.

Virgin Records was unwilling to release MACHINA II/The Friends & Enemies of Modern Music so close to the first (and commercially unsuccessful) MACHINA. As is evident by the title, the band was fed up with Virgin. As a final farewell, and as a snub to the unsupportive label, it was released independently. Only 25 total copies were made. The vinyls were shipped via FedEx to several heavily active fans in the online community, with instructions to immediately redistribute it among the fans. Originally, the songs were intended to be the second disc of a double album instead of two separate releases. Virgin declined a double album from the band as the previous Pumpkins album, Adore, had not sold well.

Though not as well known among Pumpkins fans as the band's commercial releases, MACHINA II perhaps enjoys greater popularity among die-hard fans than its sister album, MACHINA. Its underground popularity can most likely be attributed to its hard, raw sound and rough energy. This sound was further defined by the manner of the album's release: the tracks were sourced from hand-cut vinyl records and then uploaded to the internet. The end result was a collection of heavy rock songs with a very raw, "lo-fi" sound intentionally characterized by pops, scratches, and other distortions. For fans left unsatisfied by the muted atmospherics of Adore and the sometimes over-processed and obtuse first MACHINA, MACHINA II was a welcome return to the band's hard rock roots.

The Pumpkins performed a track from the album ("Cash Car Star") on The Tonight Show with Jay Leno, which also ended up being the band's final television appearance. The performance was a rarity as "Cash Car Star" was not a single in any way, and MACHINA II was unavailable for purchase. (Leno even held up an actual vinyl hard copy of the album in true talk show performance tradition, with the comment "You can download it on the internet") The Pumpkins' Rotten Apples (Greatest Hits) 2001 release contains the MACHINA II track "Real Love." Two MACHINA II b-sides, "Lucky 13" and "Slow Dawn," were included on Judas 0 (which was packaged with some Greatest Hits pressings).

On August 5, 2005 the Q101 copy (#19) was put up for sale on eBay. The seller decided to end the auction four days early when the bidding had reached $10,000 from a bidder in France. This bidder has since disclosed that there was a mutual agreement after the auction was ended to cancel the sale transaction. It remains to be seen if this copy (or any other) will go up for sale again publicly in the near future, but the episode suggests that an original vinyl copy could fetch a five-figure sum.
1 - Blue Skies Bring Tears (heavy)

The Internet Archive discriminated against me because I came down with an illness, and they blacklisted me from the LMA.

My music is still in the Community Audio section, and I've blogged about it all here:

And thanks for your awesome music guys. To thank you, I give you my music here:

* Cash Car Star, although deemed "not commercial" was, indeed, a hugely popular performance piece, and I hope it is brought back in the recent reformation of the band, for their touring set lists.

* Let Me Give the World to You is as "commercial" as the Pumpkins might ever have been, and this soung could easily have made the transformation into some movie soundtrack; a beautiful composition.

* Real Love was likely my least favorite, as they took the lo-fi groove to a whole new, and "lowest" level... it sounds as if they intentially ran nails across the vinyl, before releasing it.

* White Spyder sounds like so many other Pumpkins songs - - "comfortable"... I felt as if I'd known this song all my life, even though I'd never heard it before. It is Classic Pumpkins, and You NEED to have this in your library...

Hell, you need to have this ENTIRE ALBUM in your library, for that matter... it is a beautiful thing, that it was released freely to the public, and any fan of Smashing Pumpkins would be proud, of its sonic adventureousness, as well as the quality of the songwriting.